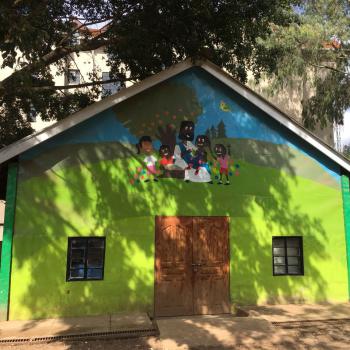 Jesus said, "Let the little children come to me, and do not hinder them, for the kingdom of heaven belongs to such as these." ~ Mathew 19:14

It is hard to forget the sight of a seven year old child roaming the streets of a city at night, sniffing glue out of a bottle in order to stave off the hunger pangs. Sadly, this is a very common sight in large cities in Kenya, where thousands of girls and boys live on the streets because they are AIDS orphans, because they were abandoned by their parents or perhaps because they escaped abusive parents. Being on the street means these children are often victims of physical and sexual abuse.

The mission could not turn a blind eye to the predicament of these children, and thus the need for a program that assists and supports them.

RAHA KIDS and community schools are places of hope for the children of promise – hope out of poverty, abuse, neglect and depression. Love never fails when we share the love and joy of the Lord Jesus Christ, with those whom have never experienced.

They come to us, the abandoned, the abused and the orphaned boys. Many times due to severe poverty, they come to our gates, alone, or they are brought by neighbors, guardians, or single mothers, who can no longer provide for them. Many times the children themselves escape their deplorable conditions, and find themselves on the streets, looking for love, hopes, and dreams. What they encounter, however, is the grim reality of exploitation, and false hopes and promises.

In Kenya, in order to survive on the streets, young people often beg, carry luggage, or clean business premises and vehicles. A 15-year-old orphan who had been living in the streets for four years said that he used to collect garbage, and help load and unload market goods, earning him up to 80 KSH (US $1) a day. (IRIN (2007), Youth in crisis: Coming of age in the 21st century – ‘KENYA: Nairobi’s Street Children: Hope for Kenya’s future generation’)

We pray that as they receive and experience His love through those who are here to serve them, it will transform them, so that they will fulfill their human potential, morally, physically, and academically. RAHA Kids is a place for education and transformation, where the boys are taught core academic subjects, and participate in extra-curricular activities such as soccer, acrobatics, drama, film, music, art and computer technology. After the boys complete their primary and middle school here at RAHA, sponsors are sought in order to help support their secondary education, whether it is vocational, technical or academics.

In order for the boys to maximize the fulfillment of their human potential, learning obedience, respect, responsibility and resiliency is an integral part of the program. We believe that it is only through Christ, who is the unseen, but ever-present teacher; that His children here at RAHA have been transformed – we’ve witness it. He is the model for us all, and the ultimate inspiration for the children.